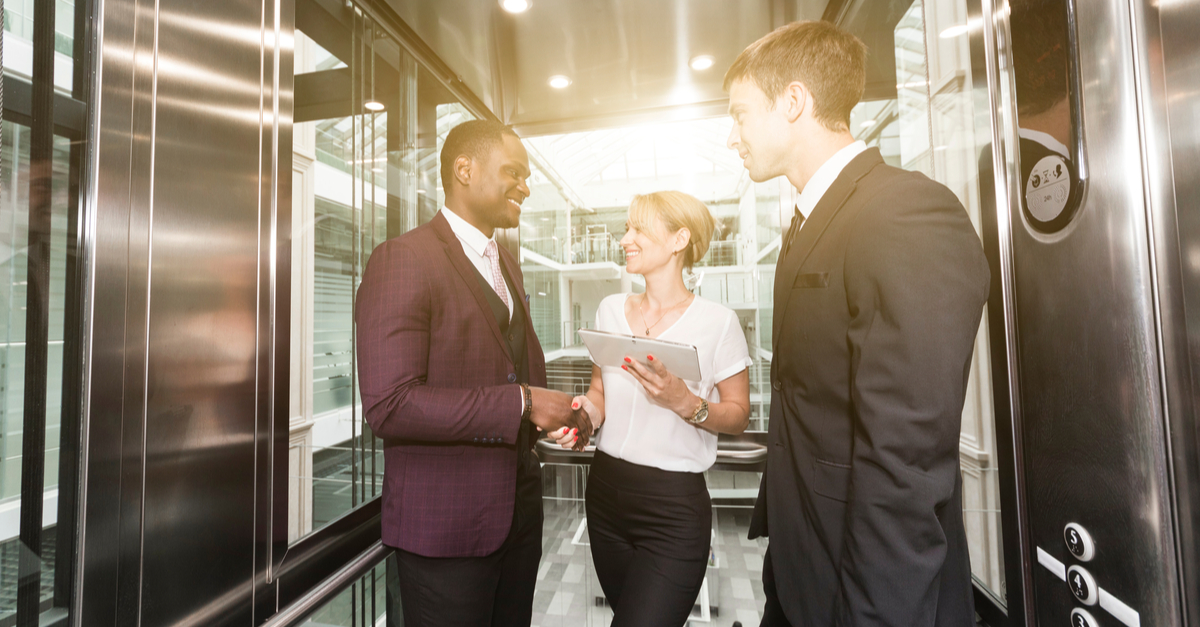 The ‘elevator speech’ is a sales technique that has been around an awfully long time. Although it may certainly have its place for specific types of salespeople, I for one sometimes feel it is extremely ill-suited in the Financial Advisory world.

If you truly wish to have that consultative style practice, where referrals are the norm, it might be wise to abandon some of the sales approaches that were imprinted onto our psyches from day one in the business. The elevator speech is one of those approaches.

For an advisor looking to attract affluent clientele, the very notion that I can compel or predispose someone to become my client because of some snappy banter upfront, is unlikely at best.

I’ve heard Financial Advisors many times, and in various social situations, attempt to do this very thing. As an observer, it seemed that if they accomplished anything, it was probably turning the listener off and inspiring them to seek better conversation elsewhere.

The irony of it all is that people are attracted to things that they cannot have, or that are ‘hard to get,’ so why do we work so hard to ‘chase’ with the elevator speech, when we really should be working on trying to ‘attract’ instead?

That said, if you think about it, the elevator speech completely goes against basic human nature. Further, although the words have been prettied up greatly, the elevator speech basically announces to the world that you are on the hunt for clients. This is not attractive to me whatsoever. Is it to you?

So what then is the alternative? This is a recurring situation, in a variety of business and social interactions where we are asked what we do for a living. How best to make that compelling and attractive?

The answer lies in trying to paint a picture, in as few words as possible, that describes your business in a way that the listener wants to be a part of. You then stop talking about it. You then start asking that person questions about their life and their business. Trust me, even if you don’t say another word because the person is telling you their entire life-story, they will recall you later as that amazing conversationalist at the party. You know, the one with the exclusive Financial Advisory practice?

An example of some anti-elevator phraseology (delivered in a low-key and casual tone, and of course with a smile):

“Oh, well. I am a Financial Advisor. I have a practice in town here that intentionally has a smallish number of very terrific clients, and you know, ever since I started working with people that I like, it’s a lot more rewarding for me, it’s more exclusive, and I am really enjoying some terrific relationships with my clients. You know, I really wish I had taken this approach years ago. It is just a really exciting time to be in this business. Well enough about me. How about you Dorothy? What do you do? Oh really? How interesting, please tell me about that.”

So, to dissect that suggested phraseology, you have just described an attractive situation that any reasonable person would want to be a part of, but you made no overtures to doing business together. You alluded to your approach by talking about the great relationships you have formed, which displays your integrity.

You also projected great scarcity for yourself in the process, and you have made yourself attractive. Anyone reading between the lines sees someone who clearly does not need the business, and your probing questions about them show charm and confidence.

I know of a young advisor that used this exact approach. He worked previously at one of the ‘Baby Bells’ (phone company), and continued to network with his past colleagues, and some other local groups, and in seven months had seven clients that all had three-million or more each in investable assets. This last fact was by design as well, for he had set an ideal client profile for himself that stated his target market was people in the three-million plus range in investable assets, and he stuck to it religiously.

This advisor had incredible discipline and word started to get around. Every time one of his ex-colleagues asked him what he was doing these days, he stated his anti-elevator mantra, and then started gathering F.O.R.M. (Family, Occupation, Recreation and Money) information on whoever he was speaking with.

Because of his discipline, you can imagine it was only a matter of time before someone said: “You know, I am not that satisfied with my Financial Advisor right now. Are you taking on new clients?” He would reply: “Well, that possibility is there for sure, but it has to be a good fit for me, and for you of course. How about you give me your number, and I will call you when I am at the office. I have an initial meeting process I use whereby the two of us can mutually determine whether or not we might be a good fit for each other.”

After this, they would get back to having fun, or business, or wherever it is they happened to be. It is an incredibly disarming approach, and unlike what many have come to expect in those all-too frequent situations.